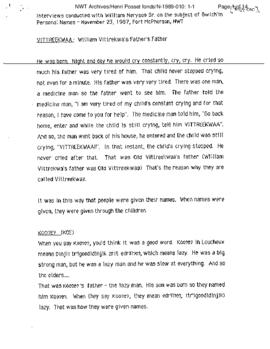 Title and statement of responsibility area

Other title information of publisher's series

The first recording was made in September 1957. It consists of drumming and chanting taped in Jean Marie River and Fort Franklin, fiddle music from Fort Franklin and various Slavey legends related by Johnny Betseda of Fort Simpson and Jean Marie Punch of Fort Providence. The second recording, with John Tsetso, was made on April 1, 1964 in St. Margaret's Hospital at Fort Simpson. In this recording, Tsetso narrates, in Slavey, the first three chapters of his book, "Trapping is my Life," which was published in February 1964. He also relates two other stories about summer and winter. The accession also contains two letters written by Father Posset which provide some biographical information on Johnny Betseda, John Tsetso and Jean Marie Punch. There is also a typed transcript of an interview between Father Posset and William Nerysoo, Senior, relating to Gwich'in personal names which was conducted on November 23, 1987.

Availability of other formats